The overall aim of the Brain Function at Laboratory Yale School of Medicine is to understand the neural mechanisms that underlie live dynamic social interactions between individuals. A novel application of functional near-infrared spectroscopy (fNIRS), shown below, has been developed by the lab and enables simultaneous imaging of two individuals engaged in real face-to-face interactions. While ongoing and previous fMRI studies focus on segregated and distributed neural processes within single individuals, the Brain Function Laboratory is also expanding the experimental paradigm from a single-brain frame-of-reference to a multi-brain frame-of-reference using near-infrared spectroscopy, NIRS. The investigation of neural complexes associated with dynamical brain-to-brain/person-to-person communications is largely unexplored. For these investigations, Blood-Oxygen-Level-Dependent, BOLD, signals acquired by NIRS; electroencephalographic, EEG, signals; and eye-tracking data are acquired simultaneously on multiple individuals using surface optodes and electrodes respectively.  These neuroimaging measures are synchronized with eye-tracking and physiological measures obtained by head mounted cameras and physiological sensors. Models of dual-brain interactions are based on coherence between wavelets of signals originating from cross-brain pairs of regions.  Advances build upon theoretical, technical, and methodological foundations of behavioral and functional neuroimaging studies in the laboratory, and open a novel window-of-opportunity to investigate the neural correlates of dynamic interactions between individuals under natural (ecologically valid) conditions. The Brain Function Laboratory is currently focused on specific studies of dynamic coalitions and neural operations that regulate inter-personal dialog and social interactions including conflict, competition, cooperation, non-verbal communications, music and communication, and the role of mutual gaze and faces in interpersonal interactions. A long-term goal is to understand the neural correlates of dynamic social behavior.  The Brain Function Laboratory was established at Yale University in 2013 under the direction of Professor Joy Hirsch following a transition from Director of the fMRI Research Center within the Program for Imaging & Cognitive Sciences (PICS) at Columbia University in New York. Visit our lab website at Yale School of Medicine here.

March 22, 2012 — Our lab is featured in an article about fNIRS and hyperscanning on Optics and Photonics News.  “Shedding Light on the Human Brain” discusses the how functional near-infrared spectroscopy opens a window into brain activity outside the confines of an MRI machine. The link to the article is here.

February 11, 2021 — Our recent publication “Interpersonal Agreement and Disagreement During Face-to-Face Dialogue: An fNIRS Investigation” has been featured in the Wall Street Journal and Yale News.  The link to the original article in Frontiers in Human Neuroscience is here and the link to the WSJ article is here. An additional article in The Ladders also summarizes the research study here. 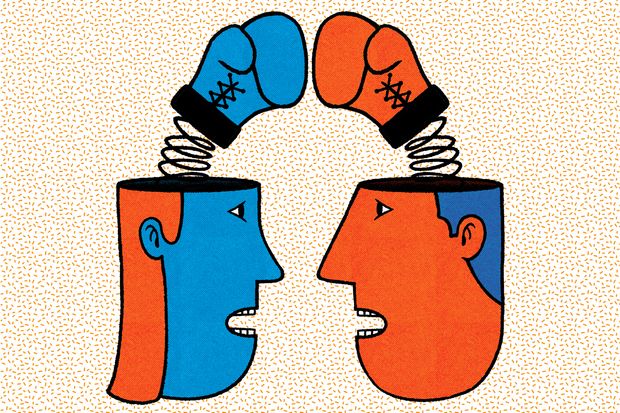 October 5, 2020 — Neurobiology of Conversation – Brain activity depends on who you talk to. “There is a neurobiology of socialness, and neurobiology allows us to modulate our response to diversity,” Hirsch said. “We want to be inclusive, we want equity, and theoretically, neuroscience can say something about how we can achieve that.” The whole article is available at the following link. The orginal article is available at the Social, Cognitive and Affective Neuroscience website here.

This article is also getting coverage in the press – here is a link to some of the coverage.

The Yale Daily News also has coverage of our study — here is a link to the article.

February 7, 2020 — Two new manuscripts have been accepted for publication.

October 19-23, 2019 — Members of the Brain Function Lab attended the annual Society for Neuroscience Conference in Chicago, IL. Spectrum News published a very nice summary of the work presented.  It is available at the following link.

October 5-10, 2019 — Members of the Brain Function Lab visited National Taiwan Normal University (NTNU) in Taipei, Taiwan to attend the inauguration of the joint lab between Haskins Laboratories and NTNU.

January 11, 2019 — Joy Hirsch, PhD, Professor of Psychiatry, of Comparative Medicine and of Neuroscience, Yale School of Medicine: “The New Neuroscience of Two Neural Dynamics of Communicating Brains: Hyperscanning with fNIRS”.

January 9, 2019 — Two students from our lab have been announced as semi-finalists in the Regeneron Science Talent Search. The official announcement can be downloaded here.  Congratulations to Aaron Geula and Michelle Goh!!  More information will be made available on January 23, 2019 on the Regeneron website.  Click here for more information.

October 5, 2018 — Several new manuscripts have been published by members of the brain function lab including studies on verbal and non-verbal interactive communication using hyperscanning and fNIRS.  The manuscripts are in the journal “Social Cognitive and Affective Neuroscience”.  References and direct links to the articles are below:

The articles are open access but pdfs can also be found on the publications section of this website here.

October 4 – 8, 2018 — Members of the Brain Function Lab presented current work at the Society for fNIRS conference in Tokyo, Japan.

May 31, 2018 — The work of the Brain Function Lab is featured in Scitech Europa. “The new neuroscience of ‘two’: the challenge to understand communicating brains” Full article here.

March 1, 2018 – Dr.Hirsch and the social research in the Brain Function Lab was highlighted in issue 124 of Research Features magazine, titled: “Celebrating Women in Science”.  The entire issue is available online for free here. A pdf of the article “Two brain neuroscience: understanding our social selves” is available here.

April 20, 2017 – An undergraduate student in the lab, Jenny Jeiyoun Park showed her senior thesis for her degree in Art.  The Painting represents influential aspects of Jenny’s second life as a scientist.

February 23, 2017 from 4:00-5:30 p.m. – Dr. Hirsch will be presenting work from our lab at Gallaudet University. The lecture will be in the Library, (MLB) Room B111.  There will be a reception to follow. A live stream of the lecture will be available and archived at webcast.gallaudet.edu.  Additional info below:

Human brains are primarily adapted for social interaction and communication. However, the underlying neural processes associated with social interaction and communication are not well-understood. This knowledge gap reflects both conventional limitations in neuroimaging methods that are restricted to single individuals and not conducive to investigations of naturally occurring human interactions, and also a limited theoretical framework for understanding human interpersonal interactions. Both are addressed by recent developments that include: 1) a novel hyperscanning technology (functional near-infrared spectroscopy, fNIRS) that acquires hemodynamic signals simultaneously between two naturally interacting partners using a spectral absorbance technique that detects changes in hemodynamic signals acquired by surface-mounted optodes, and 2) a recently proposed Interactive Brain Hypothesis that establishes a broad theoretical framework for two-person social neuroscience. This hypothesis is based on the assumptions that two-way communications elicit specific neural processes some of which will synchronize across interacting brains. Here I present evidence for these assumptions based on two social behaviors, eye-to-eye contact and verbal dialogue. Hemodynamic signals associated with eye-to-eye contact between partners (interactive condition) were compared with signals associated with mutual gaze at eyes in a picture of a face (non-interactive condition). Similar signals for picture naming and description in a dialogue (interactive) condition were compared with picture-naming and description in a monologue (non-interactive) condition. Consistent with the Interactive Brain Hypothesis, both eye-to-eye contact effects and dialogue effects were observed in a left frontal and temporal-parietal complex including the canonical language system. Further, cross-brain synchrony observed by wavelet analysis in the interactive conditions was observed for the temporal-parietal complex. These findings are consistent with the Interactive Brain Hypothesis and suggest a model of neural specializations for communication that links eye-to-eye contact and language systems via frontal, central, and temporal-parietal networks.

January 31, 2017 – Work from the Brain Function lab in collaboration with Jamie McPartland was featured in Spectrum. The article discusses the benefits of fNIRS for studies of social brain function and suggests there is a new frontier of “interactive social neuroscience” or “second-person neuroscience” developing that will allow for better understanding of the social difficulties associated with autism. The full text of the article is here.

November 12-16, 2016 – Members of the Brain Function Lab attended the Society for Neuroscience annual conference  in San Diego, California.  We presented a series of posters and symposia focusing on social neuroscience and applications of fNIRS. The titles are listed below:

November 11, 2016 – Members of the Brain Function Lab attended the Society for Social Neuroscience meeting in San Diego, California.  We presented a poster focusing on direct eye-to-eye contact in real-world conditions.

October 13 – 16, 2016 – Members of the Brain Function Lab recently attended the bi-annual conference of the Society for Nearinfrared Spectroscopy in Paris France.  The conference was at the Université Paris Descartes.  More information about the conference is at the following link.  Three posters and an oral session were presented.

Another article by George Putic titled “Scientists Explore How Brains Work During Conversations” appeared on Voice of America on June 25, 2015. A link to the article is here and the video from the article is below:

AP Article by Malcolm Ritter (June 22, 2015): “Lasers, magnetism allow glimpses of the human brain at work”  Also appeared on the NY Times and the Hartford Courant.  Video below (with original link to YouTube here:

March 5, 2015 – Dr. Hirsch was interviewed by Carl Zimmer of the New York Times for a piece on Genius at Big Think.  The video and more information is listed in our “In the Media” page.  Click here for the direct link.

November 15-19, 2014 – The members of the Brain Function Lab attended the annual Society for Neuroscience conference in Washington, D.C.  Dr. Hirsch chaired a nanosymposium on  Language: Spoken and Written.  Four abstracts were submitted and presented at poster sessions. The posters were presented in the Language and Brain Dynamics, Executive Function I (a,b) and Multisensory: Cross Modal Processing in Humans sections.  Links to the pdf files of the posters are given here and in the Abstracts section of the Publications section of this website.

September 25, 2014.  The Brain Function Laboratory received their new Shimadzu LABNIRS. This is a cutting edge brain imaging tool with up to 114 channels and is specifically designed to acquire simultaneous signals from multiple subjects during social interactions.

November 20, 2013 – Joy Hirsch meets with President Obama in the Oval Office as her husband, James Rothman, is honored as an American Nobel Laureate. White House story here and weekly West Wing Week video blog here. An excerpt of the video can be seen below.